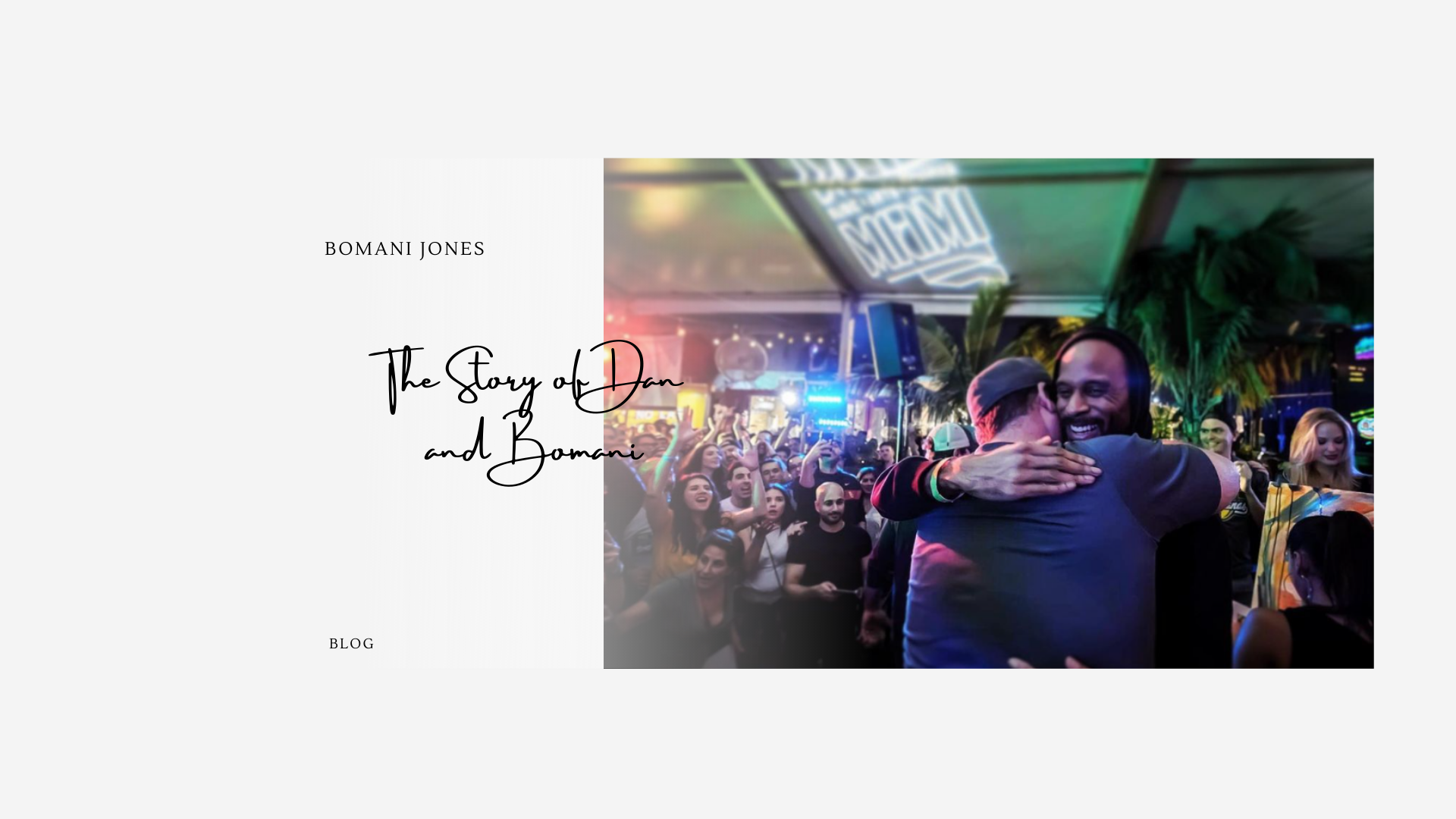 I figured, with Dan leaving ESPN, I should probably jot some thoughts down.

I left Miami for New York in 2017. I’d been there four years, working on “Highly Questionable” with Dan. We caught up the day before I left at some typically Miami spot, one of the hotel bars on Collins. The man couldn’t have been prouder of me, just like he was anytime he saw that I was maximizing the platform we shared. We’d come a long way. I don’t remember if we discussed that explicitly, but we had. We’d gone through our own individual periods of stress, loss and pain in that time, and we were there for each other, mostly in knowing silence.

In 2013, I signed a four-year contract with ESPN, a contract that only came to pass because Dan asked John Skipper to bring me on. I went in fully expecting to have my own show at the end of the deal. That, more or less, happened. It was, to that point, my greatest professional triumph, the rare time in my life I set a goal and actually achieved it.

Dan and I did this interesting thing that happens in our business — we got to know each other on television. Not like that was the only time we ever talked, but a professional necessity was conveying a warm, on-screen relationship, even when we didn’t really know each other. Getting to know someone is a process, after all.

People approach that process differently. Dan doesn’t really ease in. He’s a big, tactile, gregarious man from the very beginning. He offers himself fully, which is pretty amazing considering his stature in his city and industry. If Dan wants to be your friend, it’s like he’s your best friend immediately. And with us younger folks in the game, it’s endearingly paternal.

I’m not like that. Through the years, I’ve grown more insular and less trusting. I don’t assume anyone’s out to get me, but I’m no longer built to throw myself into someone’s arms just because they’re open. It’s not personal. I don’t even think it’s a problem. Our friendship would have to develop. It couldn’t simply be ordained.

I also didn’t want to be the little brother. Younger brother would work, but not little. I picked up my life to be a co-host, not a sidekick, on what was “Dan Le Batard is Highly Questionable.” I had no problem with the idea that the show itself was Dan’s. After all, Miami wasn’t my city and Gonzalo wasn’t my father. Dan was the reason we were there. He was the job creator, whose success on every platform allowed him to make space — and money — for so many people. And, duh, he was Dan Le Batard. Equal billing wasn’t what I signed up for, nor was it deserved.

Other stars can shine bright, but there was only one sun. And I saw — and see — myself as someone meant to be the center of his own solar system. That time wasn’t then, but that time would come, and I was positioning myself for that day.

For the first time in my career, I was sharing the stage. I’d only done solo radio, and I did a lot of the production myself (an arrogant professional habit I’ve since broken). The TV shows I did weren’t about interacting with anyone else. And Dan, for the first time in forever, was working with someone positioned to be his peer. This wasn’t a “with Bomani Jones” production. This was “and.”

I’m sure that required some adjustment from him, more than he’d ever considered. Not only is Dan magnanimous, he is perfectly aware of his magnanimity. Being a good, selfless dude is part of his self-concept. But he’s a human being and far too talented to be bereft of ego. Considering how much he’d given just to have me on the show, I figure he had to reconcile a lot of things he didn’t even know were in him.

For a few reasons, I was resistant to Dan’s generosity. I don’t think he knew how to take that, because who would ever say no to a legend in the game offering anything he could do to help? But, to that point in my career — and, hell, probably still — I hadn’t come across anyone who understood how to get the best out of me but me or anyone I truly trusted to try to do so.

I probably listened more to his advice than he realized I did, but I didn’t take it all. There were limits to how much he could tell me because so much of my experience — heavily influenced by my skin color — was beyond his comprehension. Dan couldn’t understand how it was that I wasn’t already hosting a TV show, so the best he could do was guess. Maybe I was too acerbic for viewers and executives, so I should be a bit softer. He was right about softening a bit — something that’s definitely happened since I debuted on “Around the Horn” — but I never thought that was the holdup. I’d been successful on radio being who I was, and I’d built a warm, vibrant community around those shows. But on radio, there’s time to stretch out and really let people get to know you. On TV, they get moments from you. That required something different.

Luckily, there was a jolly old man who sat between us on television. Dan’s relationship with his father is complex, because that’s how father-son relationships tend to go. Now add to that bringing your father to work, and he’s doing the same job as you, putting you in the position to tell your father what he should or shouldn’t be doing, to correct him in front of other people. That was a lot for both of them.

But see, Gonzo wasn’t my daddy. I never worried about whether he was holding up the shoot or doing something embarrassing. He was the dude I’d watched on TV, who made me laugh. I walked in the door loving the dude, making it easy for me to be helpful and gentle to him when he needed it, which allowed the audience to see me in a way that would be impossible while arguing about sports. The softener, for me, was right there. Dan was absolutely right about that.

These were the things we worked through, really, the first two years of the show, and we were doing it while not actually talking to each other on screen. The chairs faced the camera. We didn’t face each other. We just talked. We had great chemistry, but that was primarily intellectual. We tried to switch off who would lead interviews, but that wasn’t gonna work. Dan was so much better at it than I was, so I stepped back and figured out how to supplement the master at work. It was my job to know when Dan hit gold and didn’t realize it, something that struck my black, rural, Southern, public school sensibilities that might miss a man who spent his life around fancy parts of Miami. Which is to say, we were better at talking to other people than each other.

No one could tell, though, and the show was a massive success. The ratings went up as soon as we got together. Remember — the first of the studio shows to migrate from ESPN2 to ESPN was HQ. We were at the front of the network’s changing approach to what shows aired where. We’d figured out the TV show, even if we hadn’t figured each other out.

We never really figured out radio. It was an awkward fit, one that some feared would damage our relationship on the TV show. Long of the short was I didn’t do well as a co-host. I didn’t blend in well with the tenor of the show. I take up too much space, my sense of humor is totally different from theirs, and if I’m being honest, I don’t really get the show. I mean, I do, but that ain’t me. I’m friendly with everyone on the show, but I’m not part of it like some of my peers are. I’m not an acolyte. It’s Dan’s favorite place and thing, but it was never really for me. I’m not sure how much that could help our relationship.

It took time, but the rapport I figured would come with time got there. I trusted his counsel more. He understood that my caring looks different than his, but was always there. And, as I told him once, I had to reconcile the Dan I’d created in my head with the one I met. I’m not sure he ever had a chance to live up to the towering figure he was to me, both as a colleague and a caring individual. He was going to disappoint me at times because he was a legend by the time I met him. The fact I thought so much of him led to points where Dan felt I thought little of him, which was never the case. One of the coldest dudes in the game asked me to run with him. I never lost sight of how incredible that was, or how rare it was that someone would take his name off the marquee of his own television show to make room for someoneelse, in spite of what his friends and advisors thought. He made a big bet on me that, with twists and turns, changed my life and paid off handsomely for us all.

Lemme jump to November 2017. I was between TV shows, and came to Miami for a week to do HQ for the first time since I’d left. It felt like home. The things that were difficult sometimes — doing a radio show in a studio fully decorated for the real star in the operation isn’t always easy — didn’t matter because I wasn’t immersed in them. What I had was a ridiculously talented co-host, my second-favorite old man in the world, and a television show that hummed. We laughed at each other’s jokes. We knew when to push and to pull. I think we all knew what we were pretty sure of before — man, we had something special there. It had to end, but that was a helluva run.

Then the TV show I left HQ for, “High Noon,” was cancelled. ESPN renewed my deal in spite of that, and my primary duty outside of my podcast became doing HQ. It was listed in the press release and everything. It was still Dan’s show, but it felt different. Papi wasn’t doing the show daily. There was no longer a set. It wasn’t nearly as clear that it was all built around Dan. There was nothing wrong with what it was before, but it was definitely different.

Along the way, Dan got the bright idea that he and I should do the show together once a week, just the two of us. It was typically on Wednesday. Viewers would look up and see the two of us. It was both nostalgic and brand new. It was something few could do, as that’s a lot of airspace to fill with just two voices.

For me, it represented something I’d always wanted, even if I knew it wasn’t possible before. I was Dan Le Batard’s partner. I could set him up and he could set me up. We were obviously friends and peers, and the audience could see it.

We were what we’d hoped to be. And it’s what I expect we’ll be until the end.

69 thoughts on “The Story of Dan and Bomani”